St Blasien is difficult… Oh, did I say so in one of my former blogs, didn’t I?
Many years before had sidled here a 1 Michelin star Italian restaurant. There family hot it hard: they did not even had to take the – probably – 10 small tables, nope. 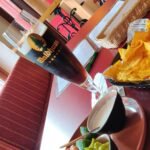 They also had to take the 5 rooms upstairs. And with the restaurant only slowly – but steady – had more guests, Swiss guest, it was too much for them. The closed after – if I am right, after 5 years. What a shame for the inhabitants.

And now? A Mexican in St Blasien? Opens a restaurant? Oh my.

And then I realised, whose open the Mexican: The family – do I guess right? – of ‘Bergstüble’ at Kalvarienberg in St Blasien. The Bergstüble has, over the years, developed itself and because of the owners to a true gem. 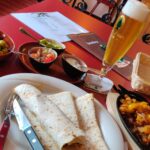 My idea was, to go there straight after they opened twice and eat some starters and eat a main course. And I had a ‘secret’ guess for the Mexican as well… It looks nice inside: cosy after Richard Torra finished the renovation. I ordered olives as a starter and Fajitas with shrimps, onions and peppers and three dips: pico de gallo, sour creme and Guacamole. Yummy! But too much, at least at an old f..t like I am.

Wow! That was a good treat. Two weeks later, I am back again; confirmed by my sister in law who had eaten with a friend there, right Suzana? They were surprised as I have been before. But this time it was different. Except for the beer: They had – I hope I remembered it correctly – 5 different beers from the tap. And especially at that day the waitress made it perfectly: not woo quick and not too slow she put a glass of dark, unfiltered Waldhaus dark Pils which just tasted great.

I ordered three different starters: Meatballs, a Mexican spicy soup ‘Azteco’ and a tortilla crisps with the same dips I had two weeks ago… Well, I have to say, Richard, if I hadn’t have the memory of that perfect shrimps fajitas, I would not have written an blog entry at all. Because from tortilla chips to the meatballs, your cook obviously missed some spices! I am not sure if the second cook was the same than the first one – but I guess, that was the reason.

So! I have to congratulate family Torra and Richard for the courage to open a second restaurant; and, I am sure that Richard will make the right decision for this Mexican restaurant. What absolutely astonished me: How many guys and girls from the region of St Blasien and tourists passed the Mexican restaurant: ordered food to go, drink a beer outside or sit down in the cosy restaurant and had some dishes. Your idea was right: ¡Viva Mexico!